What does the Gini coefficient mean?

The Gini coefficient is often cited by politicians and other socialists to highlight income inequalities. Usually, it is meant to invoke a moral judgement concerning income gaps, thereby justifying government intervention in the economy in a Keynesian manner. This is exactly where the Gini coefficient is abused for ulterior motives. 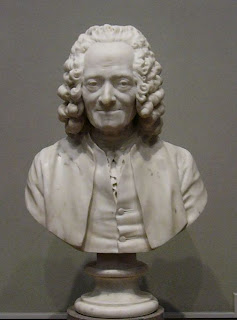 Whatever you do, crush the infamous thing, and love those who love you. - Voltaire, who rocks and not just because he is a bust.

What is the Gini coefficient?

This sounds confusing, but it isn't. The Gini coefficient is simply a measure of how far the actual income distribution is from the line of perfect income equality.

What moral implications does the Gini coefficient have?

None whatsoever. The Gini coefficient simply states things as they are, even though its value may be distorted to suit your particularly malignant political purpose. The reason why I claim that there cannot be any moral scrutiny forthcoming from the Gini coefficient becomes apparent when one looks at the list of countries by income inequality.

Some deductions from the list of countries by income inequality

Suggest that both the CIA and the UN had the same data sets. If the CIA used a lower granularity than the UN (in other words, less quantiles, or less squares on their grid), their Gini coefficient would usually be lower than the Gini coefficient of the UN. If you want to prove to your country that your economic policies are bringing about more income equality, you should use lower granularity.

Yet if the CIA used higher granularity than the UN (in other words more quantiles, or more squares on their grid), the Gini coefficient would typically be higher than that of the UN. If you were running a presidential campaign and you'd like to show your potential voters how the previous regime has failed, you could show them a Gini coefficient calculated with higher granularity.

Note that the same data set here could give widely different figures, while the actual income distribution has not changed one bit. This is why a Gini coefficient cited without describing the proportions of the quantiles used is a meaningless number that is better than a thumb suck number at a ratio of 1 to 0,999....

What is the use of the Gini coefficient?

Having a state of affairs where a brain surgeon, a rocket scientist and a waiter all receive the same wage is not a desirable one. This is because transporting beverages does not really require the amount of mental strain, education, training and strong character that is required to obtain a PhD in physics or medicine.

Naturally, the opposite side of the spectrum, where one institute enjoys all the income while nobody else shares in the spoils of the gravy train is a kleptocracy. This is not a desirable state of affairs either. The safest road is usually in the middle. Intuitively, we deduce that a Gini index of around 0,5 is the most equal in that it is fair towards brain surgeons, rocket scientists and waiters, all things being equal.

Economic development and how it relates to the Gini coefficient

Simon Kuznet discovered that - contrary to the interpretation often cited by hysterical politicians - a developing country often shows a decline in Gini coefficient index. This makes perfect sense because some people would start earning more while others would still earn the same, or less. This is a good sign, as it means development is taking place. Furthermore, Kuznet claims that the Gini coefficient reaches a maximum, after which the income inequality begins to decrease as more people work themselves into higher income groups.

What is the ideal Gini coefficient?

According to econometrics, the ideal Gini coefficient lies between 0,25 and 0,40. This is because at a level where brain surgeons, rocket scientists and waiters all receive the same wage, there is no financial incentive to study physics or neuroscience. Similarly, at levels where income inequality is too high, the ownership disputes and social incoherence affect development negatively. Private property and other human rights cannot be guaranteed to last where a government can decide to say, nationalise mines and disrupt productive farms after sniffing too many beer farts in a shebeen.

South Africa had a Gini index of 0,65 in 2005, according to the CIA. Instead of requiring the government to act to bring this Gini coefficient down for its own sake, it is perhaps a better idea to start focussing on the implications of such a high Gini coefficient, namely:

Next time you read a Gini coefficient thrown around like an absolute, simply enquire as to the granularity of the quantiles. If the author or speaker cannot answer you, chances are they read about a terribly high Gini coefficient on Wikipedia and are trying to create their own moral panic. It is imperative that a Gini coefficient be contextualised properly before it has any meaning whatsoever, as a number by itself is nothing but a number. A high Gini coefficient could be a very good thing, or a very bad thing, but it does not correlate with a desirable state of human development or with economic development.